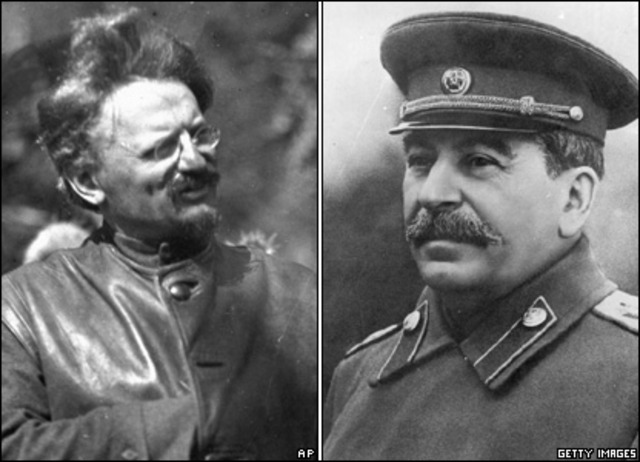 The date was December 28th, 1922. A group of over 2,000 delegates from all over the former Tsarist empire of Russia gathered in Moscow to consolidate the new socialist republic they had fought so hard for over the last five years. Two days later, from the stage of Bolshoi Theatre, they presented to the Russian people the Treaty on the Creation of the Union of Soviet Socialist Republics. Thus began the first true socialist nation in the history of the world.

But the country’s birth was not without strong labor pains. Indeed, the three biggest names associated with the advent of the Soviet Union-Vladimir Lenin, Joseph Stalin, and Leon Trotsky- all had very different ideas for structuring the new government and how best to continue the worldwide socialist uprising they started. In this entry of “The Complete Noob’s Guide to the Left,” we’ll examine the philosophies of these three men to see how the future of socialism may have progressed had either one may have done things differently, as well as how Russia fared when Stalin became the victor.

Lenin had already been in poor health for about a year before the December 30th declaration. He had been showing signs of hyperacusis, insomnia, and headaches that were so bad that he tried to get his wife and sister to purchase potassium cyanide so he could kill himself. To this day, no one is exactly sure what was wrong with him; theories include neurasthenia, cerebral atherosclerosis, and even syphilis.

In any case, Lenin’s poor health worsened significantly when he suffered a stroke in May of 1922. He had largely recovered by July but then suffered another stroke in December. It has been reported that this second stroke was caused by an argument with secret police chief and Stalin loyalist Feliks Dzerzhinsky over a crackdown in the Caucasus region. Another Stalin loyalist, Sergo Ordzhonikidze, had been sent into Stalin’s homeland of Georgia to quell protest movements against the “autonomization model” that Stalin advocated for. Lenin was angry that Dzerzhinsky had exonerated Ordzhonikidze for any wrongdoing, but the stroke left him unable to do anything about it.

Perhaps I should explain what this “autonomization model” is. Autonomization was Stalin’s proposed solution to the problem of what relationship the former states of the Russian Empire would have with the Bolshevik ruling class in Moscow. He offered to incorporate the Russian regional republics into the new Soviet Federation, with the ethnic minorities of each respective region allowed autonomy within the boundaries of Soviet law. Many republics protested this approach, especially Ukraine, Belarus, and the Caucasian states of Georgia, Azerbaijan, and Armenia.

Lenin sided with the regional republics, arguing that Stalin was pursuing an imperialistic goal. Remember that Lenin’s principal innovation in Marxist thought was combatting the new capitalist model of imperialism, which Marx had failed to foresee. He was worried that autonomization would undermine the Soviet Union’s credibility as the vanguard of the worldwide socialist revolution. The regional republics’ right to self-rule must be preserved, he argued.

Stalin and Lenin managed to reach a compromise before Lenin’s second stroke. Stalin, aware of how powerful Lenin still was within the Bolshevik Party system, agreed to Lenin’s terms, allowing the new socialist republic to come into being as the USSR on December 30th. After the second stroke, however, Stalin quickly set about limiting Lenin’s activities under the pretense of not exacerbating Lenin’s poor health.

But Lenin wasn’t finished with Stalin. He wrote letters protesting against Stalin’s power grabs throughout 1923, even after suffering a third stroke in March. His anti-Stalin complaints became especially vociferous after Stalin insulted his wife, Nadezhda Krupskaya, when she refused to let him see an ailing Lenin in his bedroom.

The biggest one was “Lenin’s Testament,” which he finished in January of that year, which notably argued for the removal of Stalin from the position of general secretary in favor of Leon Trotsky. He also argued that the centralization of the new socialist government functions should be limited solely to defense and international relations to keep thuggish personalities like Stalin from taking advantage.

Sadly, after Lenin finally passed away on January 21st, 1924, at the age of 53, Stalin managed to persuade the other party leaders to ignore these suggestions. Of course, one must wonder what would have become of the Soviet Union if Trotsky had taken power.

I think the best way I’ve heard to explain the differences in Leninism, Stalinism, and Trotskyism comes from this Quora article by historian Cameron Greene: Stalinism was the conservative side of Bolshevism, Leninism the moderate/centrist side, and Trotskyism the radical side.

Stalin advocated the “socialism in one country” policy, which argued that Russia should not focus on leading socialist revolutions in other countries until it has perfected socialism in the Russian state. He also pursued rapid industrialization and collectivization of agriculture, intensification of class conflict (especially with kulaks or property-owning peasants), a one-party totalitarian police state to crush counter-revolutionary movements, and subordination of socialist movements across the globe to the interests of the Soviet vanguard. Stalin was also willing to seek the advice of private enterprises like the Ford Motor Company to help the Soviet Union get its state-owned enterprises off the ground.

On the other hand, Trotsky argued for a global socialist revolution in multiple countries to overwhelm the international capitalist order more quickly. He also argued that the bureaucratic police state that Stalin was developing was antithetical to the working class self-determination and mass democracy that Marx advocated for. He was also a harsh critic of Stalin’s willingness to cooperate with capitalists to help jump-start Soviet industrialization, as he was determined not to negotiate with capitalist nations.

Unsurprisingly, Stalin did not take kindly to this criticism. After Lenin’s death, Stalin and the Politburo gradually stripped Trotsky of his government positions until he was formally exiled from the Soviet Union in February 1929. He had been living in Alma-Ata (now Almaty, Kazakhstan) for a year at that point. He spent the rest of his life dodging assassination attempts as he traveled the world railing against Stalin’s betrayal of the socialist revolution, even forming the Fourth International in France in 1938. Stalin’s assassins finally caught up with him two years later. Trotsky died at the age of 60 on August 21st, 1940, in Mexico City from brain injuries caused by the blunt end of an ice ax wielded by Ramon Mercader.

It is tempting to argue that the Soviet Union would have been a true worker’s paradise if Trotsky had come to power instead of Stalin. Let’s face it: even if his rapid industrialization did bring Russia into the modern era, Stalin was a terrible ruler by any standard. While there is still debate over whether or not the great famines of 1930-33 (the Ukrainian Holodomor being by far the most infamous) were deliberately engineered by Stalin or whether it was an unintended side effect of rapid collectivization, there is no question that it is a large black stain on his character. The dekulakization program, which took place around the same time and may have led to over half a million deaths, is a lot less excusable, as is the Great Purge of Stalin’s political enemies in 1937, which some estimate killed over a million. His religious persecutions and the roughly 1.6 million who died in the gulags should also not be dismissed.

That being said, however, there isn’t much reason to believe that Trotsky would have been any less of a dictator. Okay, that is kind of a lie. He did believe that the Soviet Union should be more of a union of worker’s councils, which does appeal to my personal preference for anarcho-communism (even if all the communes would still have been required to report to Moscow). However, as the YouTube channel Alternate History Hub explains in their video “What If Stalin Never Came to Power,” Trotsky wasn’t any less bloodthirsty than Stalin. Indeed, Stalin’s rapid industrialization ideas in his Five-Year Plans were actually stolen from Trotsky. The only difference was that Trotsky wanted to share the profits with all Russian citizens, not just a privileged few. There is no reason to believe that a Trotskyist Russia would have avoided the famines and purges that plagued Stalin’s Russia.

In addition, Trotsky would have had a whole nation at his disposal to pursue his goal of a worldwide socialist revolution. Indeed, given that Trotsky was of Jewish heritage, it is highly likely that Trotsky would have been a lot tougher on Nazi Germany than Stalin was. Of course, this could have backfired on the Soviets, as this might have led to fascists being seen as martyrs to the anti-communist cause and leading to the Soviet Union being the main Allied antagonist of World War II instead of the Axis Powers. Then again, it may also have led to socialism gaining a solid foothold in many more countries than just Cuba, Vietnam, and others. Or maybe I’m just being too optimistic.

Some fellow socialists have gone further, arguing that Bolshevism itself was its own worst enemy, that Soviet Russia was doomed to an oppressive dictatorship no matter which leader it ultimately chose. For instance, the October 1973 issue of The Socialist Standard (the official magazine of the Socialist Party of Great Britain) includes an article titled “Trotskyism, Stalinism: What’s the Difference,” where the author argues that Lenin, Trotsky, Stalin, and all of the other Bolsheviks were operating off a grievous misinterpretation of Marx. He contrasts Lenin’s view that “on its own, the working class cannot go beyond the level of trade union consciousness” with Marx and Engel’s view that “the proletarian movement is the self-conscious, independent movement of the immense majority.” He also points to how Trotsky handled the Kronstadt rebellion as proof that he was no better than Stalin.

The Kronstadt rebellion was one of the most prominent left-wing uprisings against the Bolsheviks. Thousands of Soviet sailors, soldiers, and civilians seized control of the port city on the island of Kotlin near St. Petersburg for sixteen days in March of 1921. The rebels were disillusioned by the direction of the Bolshevik government. They demanded more civil rights and economic freedom for the working class, that more libertarian socialist groups receive government representation, and that the bureaucratic systems implemented by the Bolsheviks be dismantled. The Bolshevik party leaders, Trotsky included, dismissed their rebellion as a capitalist false flag and invaded the island on March 18th, slaughtering thousands. This move was widely criticized even by contemporary leftists, perhaps most notably Emma Goldman in her essay “Trotsky Protests Too Much.”

In the end, if you ask my opinion, the Bolsheviks ended up falling prey to the same trap that the Founding Fathers of the United States fell into when they created the United States; they were not confident enough in the decision-making capabilities of the working class to allow them to exercise true democracy. True, the Bolsheviks had a leg up on the Founders in that half of them weren’t slave owners, but it’s hard for me to argue that they were any more altruistic than the Founders in the end, given how little tolerance they gave towards leftist ideologies that differed from their own.

However, that leads me to think about the other factions of the Russian socialist movement. Indeed, the Bolsheviks were only one of three main factions in the Russian revolution. So join me on the next episode, where I compare and contrast the Bolsheviks with the Mensheviks and the Socialist-Revolutionaries. See you then!