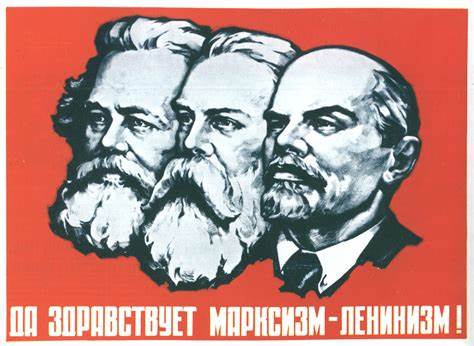 Marxism-Leninism was by far the most widespread strain of socialist thought to emerge in the 20th century. It was the form of government that the Soviet Union took after the death of Vladimir Lenin, as Josef Stalin sought to combine Lenin’s philosophy with that of Karl Marx. The results were wildly successful for a time; at its height in the early to mid-1980s, thirty countries followed Marxist-Leninist principles when setting up their socialist governments. But today, only four are still considered bona fide Marxist-Leninist states: Vietnam, Laos, Cuba, and China. But did these states fail on their own merits, like capitalist propaganda would have us believe? Or did capitalism end up strangling the baby in its crib to stop the working class from seeing a better way?

Before we answer those questions, we must first examine what Marxist-Leninists actually believe. The main difference between Marx and Lenin was that Lenin thought that Marx had been mistaken when he predicted that the working class would achieve solidarity as poverty got worse and more jobs were replaced by machines. Lenin instead argued that by outsourcing hard labor to overseas colonies during the age of imperialism, the capitalist ruling class had managed to instill workers with a false sense of solidarity with the bourgeoisie. They did this mainly by providing the workers with enough benefits to satisfy them and forestall a populist uprising.

Lenin argued that the solution to this problem was to form a political party composed of intellectuals to show the misguided working class that their bourgeois solidarity is wasted on rich people who don’t care about them. With this vanguard party in place, a revolution would overthrow the old bourgeois class and be ruled under a dictatorship of the proletariat, which Marx predicted in his original writings. Lenin interpreted this “dictatorship of the proletariat” as a one-party political system that would determine what was good for the workers and establish a strong law enforcement arm to suppress counterrevolutionaries (something that many other socialist thinkers disagreed with; more on that later).

With all of this in place, the path to the classless, stateless society that Marx originally dreamed of would eventually be realized as the rest of the world saw how well the citizens of the Soviet Union were doing under the newer, better communist regime. But sadly, as history has demonstrated, capitalism doesn’t like competition as much as it claims it does.

Russia did indeed have its socialist revolution in October of 1917 that established the very first non-capitalist nation in the modern-day. Some sources, like the Libertarian Socialist Wiki, have divided the subsequent history of Marxism-Leninism into six phases.

Phase One starts with the Bolshevik Revolution in 1917 and ends with the invasion of the USSR by Nazi Germany in 1941. This period saw the establishment of the Soviet Union as a formal state in 1922, Josef Stalin coming to power in 1924 after Lenin’s untimely death, Mongolia becoming a socialist republic the same year, and Stalin pursuing a policy of isolationism as he pursued independent industrial development.

Phase Two lasted from 1941 to 1959. This period saw the Allied Powers’ defeat of Nazi Germany and the Japanese Empire with significant help from the Soviet Union and the beginning of the Cold War between the USSR and the United States. This period also saw the first big wave of new socialist republics as the USSR sought to spread its foreign influence. Yugoslavia was the first to join in 1943, followed by Poland (1945); Albania and Bulgaria (1946); Romania (1947); Czechslovakia (1948); East Germany, Hungary, and China (1949); North Korea (1950); and Cuba (1959). Stalin died in 1954, and his successor, Nikita Krushchev, pursued a policy of de-Stalinization. Meanwhile, the capitalist countries begin covert military operations to destabilize emerging communist governments like those in Iran (1953) and Guatemala (1954).

Phase Three lasted from 1960 to 1973 and saw the creation of several Marxist-Leninist organizations that failed to seize power in their home countries. Examples include the Naxalite movement in India, the Red Army Faction in West Germany, and the Japanese Red Army. Others successfully achieved socialism, like Yemen in 1967 and Congo and Somalia in 1969. It also saw tensions between the US and Soviet Union reach a fever pitch during the Cuban Missile Crisis of 1962. Meanwhile, tensions between the USSR and China led to the Sino-Soviet Split, as Mao Zedong accused Nikita Krushchev’s policies of de-Stalinization and attempts at peaceful coexistence with the West as a betrayal of Marxist principles. Even so, Mao himself eventually established friendly relations with the US after Nixon’s famous visit in 1972. During this period, the US would also pursue much more hostile relations with other Marxist-Leninist nations, most infamously with its toppling of Salvador Allende’s government in Chile in 1973 and the Vietnam War (1964-1975).

Phase Four lasted from 1974 to 1988 and saw the second big wave of states joining the Marxist-Leninist cause. These included Ethiopia in 1974; Benin, Angola, Cambodia, Laos, Vietnam, and Mozambique in 1975; Afghanistan in 1978; Nicaragua and Grenada in 1979; and Burkina Faso in 1983. Indeed, one might call this the golden age of Marxism-Leninism, as not only did the philosophy hold sway over 30 nation-states at this time, but revolutionaries were conducting insurrections against their capitalist regimes all over the globe, albeit with little success. Meanwhile, the US continued its fight against the rise of communism. First, it seized upon the assassination of socialist prime minister Maurice Bishop to lead an invasion that toppled Grenada’s Marxist-Leninist government in 1983. Then it joined France, Libya, Israel, and several other nations in assassinating Burkina Faso’s Thomas Sankara in 1987. This period also saw American president Ronald Reagan become involved in the Iran-Contra affair, in which he was outed as using money from illegal arms sales in Iran to fund the Contra movement to oust the Communist government of Nicaragua.

Phase Five, lasting from 1989 to 1992, was when the bottom dropped out of the old communist regimes, as the contradictions inherent in the centralized economies of places like the Soviet Union caused them to start falling apart, partly thanks to Mikael Gorbachev’s policies of perestroika and glasnost. The age of neoliberalism formally codified itself as authoritarian governments, communist or otherwise, were replaced by capitalist representative democracies. Only five countries still operated on Marxist-Leninist principles when it was all over; China, Vietnam, Laos, North Korea, and Cuba.

Phase Six, which started in 1993 and continues today, sees the remaining five socialist governments struggling to adapt to the neoliberal era. Vietnam, Laos, and Cuba remain steadfastly Marxist-Leninist despite often overbearing international pressure. Meanwhile, China has adopted more and more capitalist elements as the years have gone by, while North Korea devolved into an authoritarian hellscape. What major socialist movements are left have mostly turned to social democracy or libertarian socialism (like the Zapatista movement in Chiapas, Mexico, or the PKK and Rojava movement in Turkey, Iraq, and Syria).

I have rather complex feelings about the Marxist-Leninists. On the one hand, Marxism-Leninism has a lot to answer for in terms of some of their actions, some of which might even rise to human rights violations. Indeed, the millions of deaths that occurred under events like the Holodomor in Stalinist Russia, the great famines that happened under Mao Zedong’s watch in China, and the millions of people murdered by Pol Pot’s regime in Cambodia could make a strong case that trying to centralize the entire economy under government control never works.

Even many contemporary leftists had a lot of negative things to say about how Lenin and co. were handling things in Russia. For example, Polish communist Rosa Luxemburg heavily criticized Lenin’s idea of a vanguard, which she thought would lead to a one-party totalitarian state (something that would prove all too true once Stalin took power). My personal political hero, Pyotr Kropotkin, also criticized the Marxist-Leninists as being too centralized and authoritarian. The great American anarchist Emma Goldman, deported to Russia for her radical views, even wrote a two-volume book entitled My Disillusionment in Russia, in which she excoriated the Marxist-Leninists for their suppression of independent voices (something that was brilliantly depicted in the 1981 film Reds during her argument with John Reed (see my review of that film here)).

However, as my literacy of the history and philosophy of the political left has increased, I’ve also come to realize two things. The first is that, in many cases, the supposed crimes of the Marxist-Leninist regimes have often been grossly exaggerated or even outright fabricated by capitalist propagandists. Much capitalist propaganda would have us believe that all communist nations were Stalinist or Maoist hellholes where everyone was crushed under famine and economic stagnation and anyone who dared to speak out about it was deported to a life of hard labor in the gulags. Of course, this ignores the fact that the gulags were discontinued under Krushchev’s administration as part of his de-Stalinization policies. It also ignores the fact that the Soviet Union became an industrial superpower that vastly increased living standards. Many egalitarian achievements, in the form of social programs for education, housing, health, and jobs, helped lift up much of the population.

Speaking of which, that leads me to the second thing I’ve realized: that capitalism is far deadlier than communism could ever hope to be. Let’s say we take 1997’s The Black Book of Communism at its word and assume that communism has indeed killed 94 million people in the 100+ years since the Bolshevik Revolution. That doesn’t change the fact that capitalism kills just as many, if not more, people every five years!

Of course, that’s not including all the atrocities that capitalism wrought on the world during the age of imperialism. Let’s go through some of these atrocities one by one and see how long it takes to surpass The Black Book’s death toll, shall we?

Of course, that doesn’t cover nearly all the people killed by capitalism and all the genocides, wars, and just plain negligent actions that it propagates, but the point still stands. In all, I think the last paragraph of this article from the eco-socialist journal Capitalism Nature Socialism puts it best:

Leftists who object to communism will hardly put an even infinitesimal dent on the capitalist killing machine by reproducing anti-communist propaganda. It only helps intensify the threat of burgeoning anti-communist legislation and fascist street actions against the left as a whole… Let us then consciously reorganize and struggle for economically tenable classless egalitarian ends before capitalists obliterate most of humanity and other beings with another world conflagration or simply conducting their regular buisness.

Indeed, from what I’ve gathered, it seems that the ultimate end goal of Marxist-Leninists and anarcho-communists is ultimately the same: a classless, stateless society devoid of any and all forms of coercive power. The former just disagree that such a society can be achieved without some form of centralized government, no matter the risk of it turning just as authoritarian and repressive as the capitalist society it is trying to replace.

Still, though, Vietnam and Cuba seem to have managed to achieve stable systems under Marxist-Leninist principles, even despite pressure from the capitalist West to “reform,” so maybe I’m overstating my case. Even so, I still think it’s imperative to remind my dear readers that arguments about what kind of socialist government should replace the current capitalist world order should wait until after we gain the upper hand. Arguments over whether Marxists, anarchists, primitivists, or syndicalists are correct should wait until after we’ve extricated ourselves from under the crushing weight of income inequality and climate change. What matters now is that the capitalists are hurting people, and we need to make them stop!

And that’s another episode of The Complete Noob’s Guide to the Left in the bag! Join me in future installments as I look at the various communist ideologies that directly spun off from Marxism-Leninism, like Stalinism, Trotskyism, Maoism, Titoism, Guevarism, and others. Stay tuned for those, and maybe keep an eye for this year’s Christmas special sometime later this month. See you then, beautiful watchers!