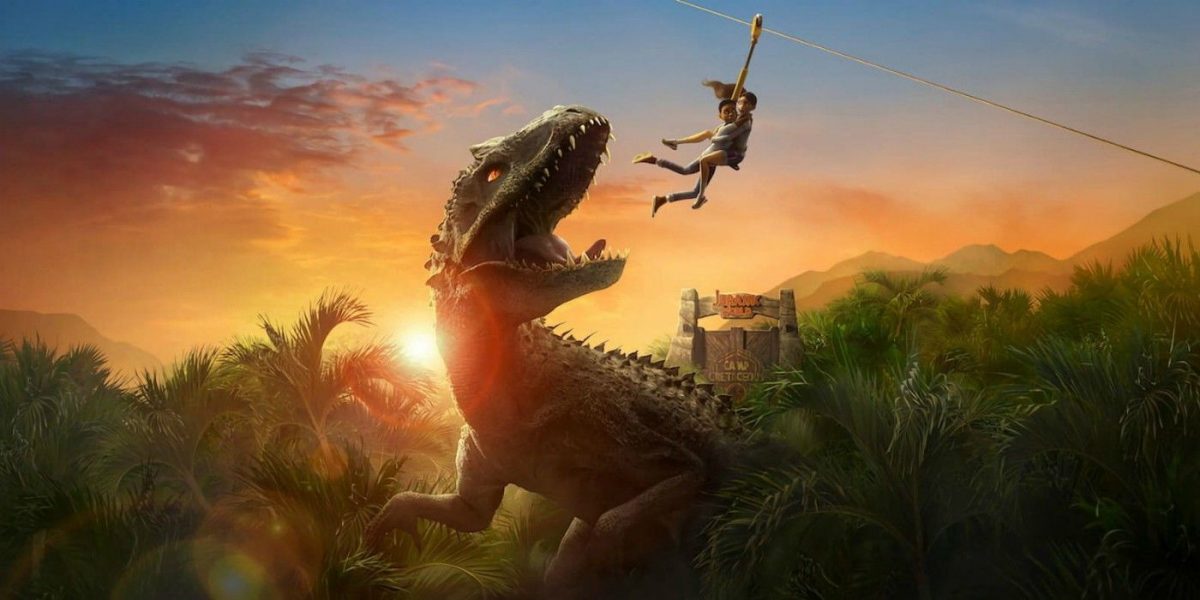 …and it’s definitely a lot better than you’d expect an animated kid’s show based on a franchise about dinosaurs eating people would be.

This iteration of the much-beloved Jurassic Park franchise follows six teenagers who win a once in a lifetime opportunity to experience the new adventure camp on Isla Nublar. They include Darius Bowman, the resident dinosaur expert of the group; Brooklynn, a travel vlogger; Kenji Kon, the oldest of the group and something of an upper-class twit; Sammy Gutierrez, an extroverted farmer’s daughter whose family farm supplies meat to the park; Yasmina Fadoula, an introverted athlete; and Ben Pincus, a hypochondriac worrywart.

Unfortunately, the events of Jurassic World happen off-camera, and the teens find themselves having to survive in the tropical ruins of the park as the Indominus rex’s rampage unleashes all the dinosaurs from their paddocks.

Like many fellow Jurassic Park fans, I had reservations about the series when I first heard about it. However, even before the Indomius breaks out in episode 4, the kids (usually Darius and Kenji) end up getting themselves in danger several times through their own childish stupidity. While plenty suspenseful, these scenes did wear on me a bit as they seemed to establish the characters lacking any common sense.

But as the Indominus attack brings the plot into conjunction with Jurassic World’s plot, the kids are forced to use their wits to survive as the few adults left on their part of the island are eaten alive right in front of them. Yes, that happens on this “kid’s show.” One incident in episode 5 even has them getting abandoned by a paranoid and psychotic scientist named Eddie, who immediately gets eaten by the Indominus shortly afterward.

The show definitely knows how to raise stakes in a very effective manner. In episode 6, they are relieved to have survived going over a waterfall… until they realize that they are in the Mosasaurus lagoon. In episode 7, the group braves a pterosaur attack and narrowly avoids having their monorail run off the tracks… only for Ben to fall out of the train when a Pteranodon smashes into it. And then finally, Season One ends as the monorail brings them to the docks, and the group finally scares off the Carnotaurus that has been chasing them throughout the season… only to find that the ferry left without them. Later on, in Season Two, they meet a trio of adults who call themselves eco-tourists and say they have a way off the island… only to discover that they have much darker intentions for the dinosaurs.

Suffice it to say, this series is right up there with the best of the films when it comes to dino terror. But the other aspects of the series are good as well. The dinosaurs look absolutely gorgeous. The designs of the human characters got some flack for clashing too much with the dinosaur designs. I don’t feel like they did all that much. The only problem I had on that front was Sammy’s design, which makes her look Asian even though she’s supposed to be Hispanic.

Speaking of the human characters, this might be my favorite human cast in the franchise since the original film (and this is coming from someone who actually likes the Jurassic World films so far). They quickly managed to grow out of their reckless first impression from the first three episodes and grow increasingly resourceful and clever, especially Ben, whose character arc I refuse to spoil here. The voice cast is excellent, featuring such names as Jenny Ortega as Brooklynn, Jameela Jamil and Glen Powell as the kids’ beleaguered counselors, and even Bradley Whitford as the duplicitous “eco-tourist” Mitch in Season Two.

The story also deserves credit for not descending into fanservice when it dovetails into the Jurassic World plot beats. It could have easily turned into something of a Rosencrantz and Guildenstern Are Dead-type affair where the film’s plot plays out while the series characters sporadically interact with it. Fortunately though, the story here is able to stand on its own.

And finally, the musical score is just as good as the films, even if such big names as John Williams and Michael Giacchino aren’t there to helm it this time.

Basically, this series is probably one of the best things to come out of the franchise in a long time. Definitely check this one out on Netflix if you have the time. Even if you hate the Jurassic World films, I have a feeling this series might win you over. And I’m giving this one a 9/10.