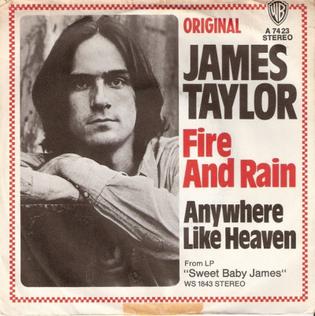 Welcome to my first ongoing series on this blog! Here on P.J.’s Ultimate Playlist, I will choose a song from any genre that really speaks to me on a personal level and explain (or at least try to) what it is that I love about it. My musical tastes are mainly centered on rock, country, and metal. However, I am willing to give literally any genre a listen at least once, so don’t expect songs from just those three genres. You can expect some Celtic folk tracks, some 60’s soul hits, maybe even a Disney tune here or there. But for now, let’s kick things off with a bittersweet track from one of the premier singer-songwriters of the 1970s folk scene.

“Fire and Rain,” which opens side two of Taylor’s second album Sweet Baby James, was the single that helped him break into the mainstream. It’s certainly not hard to see why it gained such success. It packages Taylor’s own personal struggles in a song that is just ambiguous enough to be relatable to anyone who has had a life as rough as he had at that point.

Even though he was only 21 when the song was released, Taylor had been through a lot by the time he recorded it. His late teen years were marred by a deep depression, which became so bad that he checked himself into the McLean psychiatric hospital in Belmont, Massachusetts. After his friend and fellow guitarist Danny Kortchmar convinced Taylor to check out and follow him to New York City to pursue a music career, Taylor developed a heroin addiction. This, along with a series of poorly planned gigs outside the city, caused the breakup of their band, the Flying Machine.

James entered rehab after recording his self-titled debut album in London. Although recording with members of the Beatles was certainly a high point, the two tragedies that struck him during this period would mar his psyche. First, he broke his hands and feet in a motorcycle accident shortly after a well-received performance at the Newport Folk Festival in July of 1969. Then, while he was recovering from that, his friends told him some tragic news that they had kept from him out of fear that it would distract him from his newfound success. His childhood friend, Suzanne Schnerr, had died by suicide while he was in the middle of recording his debut. He didn’t learn about this until six months after the fact.

With all that in mind, it’s easy to see all the references James makes in the song. The first verse is all about Taylor’s reaction to Suzanne’s untimely death, including his anger at an unknown “they” who drove her to her destruction (“Suzanne, the plans they made put an end to you”). Taylor has since admitted that he regrets the way he phrased that line, however. While he has stated that the line was meant to be a jab at fate in general, he sees how it could be easily misinterpreted as condemning her parents, whom James admits he never knew that well.

The second verse deals with his struggles against his heroin addiction in rehab. The line “My body’s aching and my time is at hand” in particular feels very evocative of the often punishing withdrawal symptoms that accompany the drug’s use. The verse also has a strong religious overtone (“Won’t you look down upon me, Jesus? You’ve gotta help me make a stand!”), even though, as far as I can tell, James has never been openly religious.

The third verse deals with James’s feelings as he writes the song, looking back on his successes and failures (“Sweet dreams and flying machines in pieces on the ground”). He acknowledges that the struggle is not over and that the friends he still has will help him overcome, seeing as how “there’s hours of time on the telephone line to talk about things to come.” This would prove true when Carole King (who played piano on the song) based her own song “You’ve Got a Friend” on the line “I’ve seen lonely times when I could not find a friend.” James, of course, famously covered the song on Sweet Baby James’ followup, Mud Slide Slim and the Blue Horizon.

Speaking of which, the chorus is undeniably profound, probably because it, in part, draws on some powerful symbolic imagery. Of course, here, fire and rain serve the purpose of symbolizing the polar opposite moods Taylor went through in his struggles. Fire represents the warmth of the sun on good days. Rain represents the loneliness of days when the sun is hidden from sight.

It’s certainly hard not to draw parallels between this and Robert Frost’s famous poem “Fire and Ice.” True, the subjects of the two pieces could not be more different. “Fire and Rain” deals with a single man’s personal struggles (friendship vs. loneliness), while “Fire and Ice” is a musing on how the world might end (desire vs. hate). However, if prominent astrophysicist Howard Shapley is correct, there may be a sun connection in the latter.

Shapely claims to have met Frost in 1919, a year before the poem was published. Frost asked him how he thought the world was going to end. Shapely explained how the Sun would turn into a red giant star in about five billion years after the hydrogen fusion in its core collapses. Earth will either be vaporized alongside Mercury and Venus as the expanding gases consume it or be spared this fiery fate only to freeze over as the Sun’s rays are no longer there to warm it. I’m not really sure how applicable these observations are to “Fire and Rain,” but I’m sure you could make an argument about the desire and hate metaphor applying to the song. Fire represents James’ desire for comfort during hard times, and rain represents his hatred of what has become at his lowest points. Or maybe it’s another song about the sunny good times of the 1960s being swallowed up by the grey storm clouds of the 70s, like so many other songs of that time period.

Then again, I may be delving too deep into “death of the author” territory here. More importantly, how does this song speak to me, you might be asking.

Indeed, the biggest overall theme of this song is undoubtedly friendship. Friendship has never been the easiest thing for me. As a person on the autism spectrum, I have a tough time reaching out to people. Sure, I’ll stop and talk to an old schoolmate or teacher whenever I see them in town or at my workplace, but I never really hang out with them, so to speak. This is even true with my parents, who I’ve grown rather emotionally distant from thanks to their support of President Trump. I really don’t feel like I have anyone to talk to at this point in life. It really makes me feel I need to get off my ass and join Twitter already to finally air my grievances publicly.

It is a very lonely time for me, but not without hope. While Trump’s awful leadership has exposed just how much of a shitshow America has been from the day the first African slaves landed on our shores four hundred years ago, it also helped me discover the way out. And as long as there is breath in my body, I will shout from the rooftops that better things are possible in a world without big government and big corporations and that the people are capable of ruling themselves.

But as for my feelings on the song itself, it’s great. James’ smooth, understated voice really makes it feel like he is right next to you, saying, “Listen, buddy, I’ve been there. I know how hard it is right now, but trust me. The next sunny day is right around the corner.” He sings as if his audience already has a heart as broken as his was at the time, and thus he offers comfort in his understated desperation. It’s really songs like this that let downtrodden underdogs like myself know that we are never really alone. We all know what it’s like to be sad, and we know how to overcome and find our next sunny day.