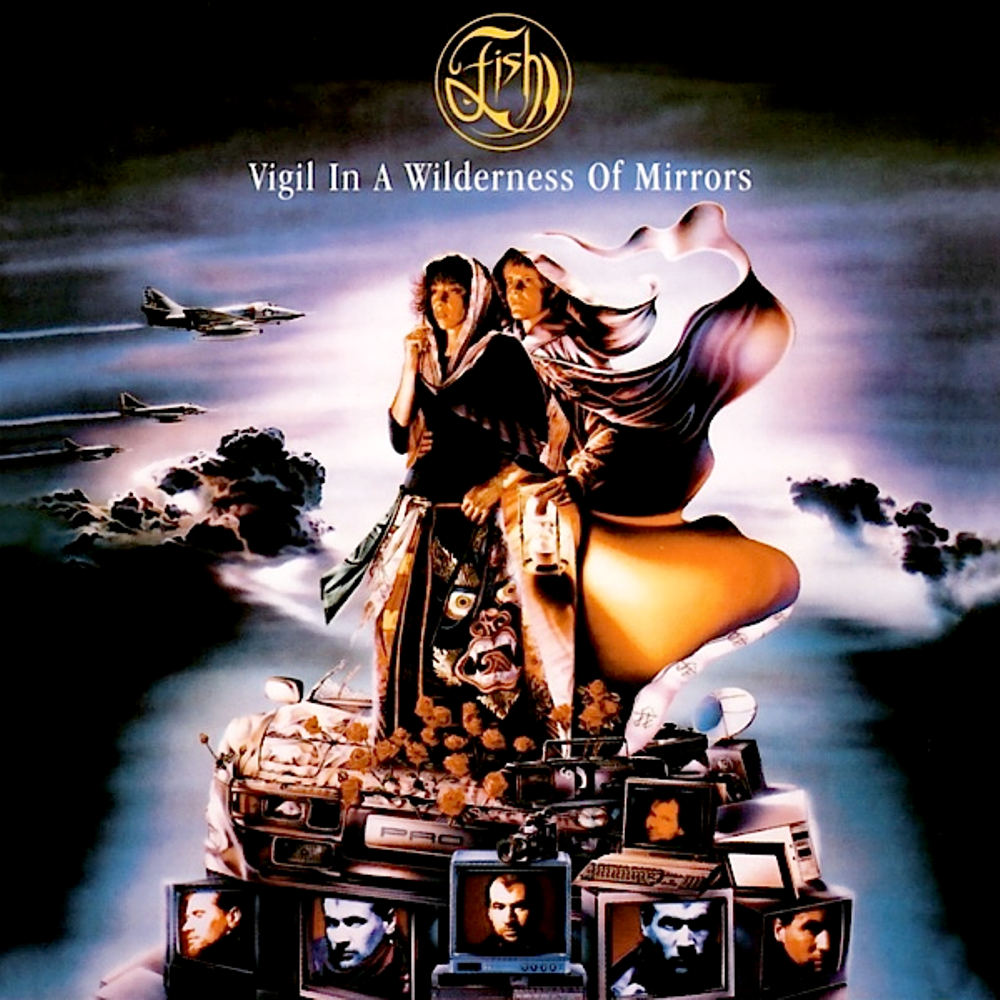 Progressive rock has often been seen as the red-headed stepchild of the family when it comes to the various subgenres of rock. In its heyday in the early 1970s, it was rivaled only by early heavy metal in terms of how much critics hated it. Granted, even as a big progressive rock fan myself, I can acknowledge that some of this criticism was warranted. Prog artists tended to take themselves way too seriously, and their often idealistic and fantastical lyrical themes became increasingly out of touch to average Joes as economic woes set in toward the latter half of the decade. Some bands managed to escape this stigma by having more cynical lyrics (i.e., Pink Floyd, King Crimson, Van der Graaf Generator) or having a sound more compatible with the radio rock format that was becoming more popular (i.e., Rush, Queen, Supertramp). But most ended up being overtaken by the much more DIY working-class sensibilities of the punk rock movement or the much more radio-friendly experimentation of new wave music.

One way that newer prog bands tried to counter this was by taking influence from these new styles, especially new wave. This led to the creation of neo-progressive rock, a primarily British scene featuring bands like IQ, Pallas, Pendragon, Twelfth Night, and Arena. However, some North American groups like Saga and Spock’s Beard have also been included under the label. However, the biggest band in the subgenre was undoubtedly Marillion.

The band experienced its highest level of popularity during the 1980s when it was fronted by charismatic Scottish singer Derek William Dick, who earned the stage name Fish due to the long baths he liked to take. The band had no less than eight albums reach the Top Ten spots in the UK charts between 1983 and 1994. The high watermark of their chart success was undoubtedly the 1985 concept album Misplaced Childhood, which spawned the chart-topping singles “Kayleigh” and “Lavender.” The former even entered the Billboard Top 100 in the United States.

Unfortunately, the album’s success quickly began to wear on Fish as he began to fear that the excessive touring schedule and pressure from management would lead to him drinking himself to death. This is especially obvious given that the band’s next album, Clutching at Straws, tells the story of an unemployed man who dives further and further into whiskey bottles to escape the shambles that his life has become. Fish performed his last concert with the band in July of 1988, and the band has continued with singer Steve Hogarth ever since.

Fish would begin his solo career in January of 1990 with the release of his debut solo album Vigil in a Wilderness of Mirrors. Several well-known musicians performed on the record, including former Dire Straits guitarist Hal Lindes, future Iron Maiden guitarist Janick Gers, veteran prog-rock keyboardist Mickey Simmonds, Big Country drummer Mark Brzezicki, and Spandau Ballet drummer John Keeble. And it is the title track of this album that I want to focus on for this episode of P.J.’s Ultimate Playlist.

The track, totaling almost nine minutes in length, begins on a soft note, with Mickey Simmond’s keyboards giving the song an almost new-age sound for the first two minutes. Fish’s vocals start out equally soft, singing about his alienation in a world that’s gone mad with consumerist greed and political violence. He asks the crowd around him to quiet down so he can find another soul who shares his disillusionment.

The vocals take a sharper tone in the second verse as Fish talks about how the way our society is set up has left him in a confused and depressed state, with Frank Usher and Hal Lindes’ guitars making their entrance with big power chords.

From there, the song turns to a more traditional rock format as Fish describes the betrayals in his life by authority figures in his life that lead him up to this point (“I was sitting here thinking of exchanging a new world for old, like changing channels on the TV, or the dirt that we stand in to gold.”) He recalls words from his father about the nature of good and evil in the world:

As the chorus rolls around, Fish appeals to a higher power to show him the truth about the world, to tell him if the authorities of this world really are all a bunch of liars or if he is the one who is deceiving himself (“If there’s somebody up there, could they throw me down a line? Just a little guiding light to tell wrong from right? Just some answers to the questions that I’m asking you.”).

He vows to “keep a vigil in a wilderness of mirrors, where nothing here is ever what it seems.” The phrase “wilderness of mirrors” was initially coined by T.S. Elliot in his 1920 poem “Gerontion” and has since been used in spy fiction as a metaphor for disinformation. This seems to indicate that Fish has dedicated himself to studying the mirror maze he has found himself in so he can finally parse out the truth for himself.

The chorus and the following verse are separated by an instrumental passage dominated by a bagpipe solo performed by Davey Spillane, who also plays the tin whistle alongside Phil Cunningham. This section is likely there to remind listeners that Fish is very proud of his Scottish heritage.

The next verse shows Fish applying this “wilderness of mirrors” approach to others who claim to share his radical beliefs to determine if they actually agree with him that the system needs to be overthrown or if they are simply telling Fish what he wants to hear in order to undermine his cause from within.

The chorus repeats one last time before the song ends, this time with additional lyrics that reflect on both the hope that a better world is possible if only the powers that be would just get out of the way and let us have it…

…as well as the fear that Fish might be putting a target on his back by criticizing said powers in such a public manner.

The last part of the song then tones back down to the soft keyboard tones present at the beginning, with Fish’s vocals calming down equally as much as he croons about how the need to do something about his decaying society is building inside of him.

This somewhat hopeful note of solidarity with the lower class masses negatively affected by the grinding nature of capitalist greed is contrasted with this spine-chilling spoken word passage at the very end of the song, which, alongside portraying the David and Goliath character of the struggle against late-stage capitalism, also instills an almost Lovecraftian sense of existential dread is this particular listener.

This song perfectly captures my feelings of confusion in these politically fraught times. To be sure, the era in which Fish wrote these lyrics was equally fraught. America and Britain were just coming out of the Reagan and Thatcher administrations, which were an absolute nightmare for people like him with left-leaning sympathies. The LGBTQIA+ community had been devastated by HIV-AIDS, which Reagan had ignored; both countries had engaged in controversial military actions in Central and South America; and the neoliberal world order that devastated the world with a new era of laissez-faire capitalism was codified. And now, thirty years later, here I am feeling the same things Fish likely was as the seeds planted during the 70s and 80s have grown into the poison oak of climate change and wealth inequality.

This song also captures the feelings of paranoia I have espousing leftist beliefs in a country that has been historically hostile to such ideologies. My own family is very conservative, with my dad, in particular, being a very enthusiastic Trump supporter. Indeed, the verse that begins with “When I was young my father told me only bad guys die” is incredibly relatable to me because I was raised to believe that the moral divide between conservatives and liberals was as clearly good and evil as the one between the orcs and elves in your average epic fantasy novel. So you can only imagine how frustrated it makes me feel to learn about things like the U.S. backed coups in burgeoning socialist countries that installed murderous right-wing dictators like Augusto Pinochet or the truth about how law enforcement agencies treated civil rights leaders and organizations like the Black Panthers and Martin Luther King Jr. It also frustrates me how my father continues to view Trump as overall good for the country despite things like the “grab them by the pussy” tape and his instigation of the January 6th attack on the Capitol building.

This makes it very awkward since Trump pretty much destroyed any sense of patriotism I once had for the United States and eventually drove me into my current affinity for anarchism. But I’ve had trouble coming clean about this to my family members because I tend to take even the smallest amount of criticism very hard, and I can only imagine what kind of shitstorm coming out as a socialist might do to my family.

Still, though, I know I’m right about the real causes of the problems in the world. I’ve never been more sure about anything in my life. And I know that nothing my family members say can change my mind on this. Who knows, my sister and brother are younger than me; maybe I can sway them before they get older and set in their ways. The possibilities are endless.

And that’s all I have to say about this tune. Be sure to check out some of Fish’s other stuff, and maybe look up Marillion as well. They are a criminally underrated band, and both the Fish and Hogarth-fronted eras are chock-full of fantastic music. Join me next time for another episode of The Complete Noobs Guide to the Left, where I talk about Marxism-Leninism, the official political ideology of most socialist countries that formed during the twentieth century. But that will most definitely have to wait until after Thanksgiving. Hope you have a festive one this year, beautiful watchers!