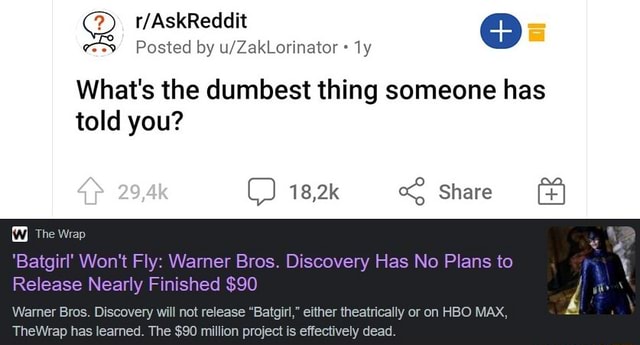 Friday, August 19th, 2022- a date which will live in infamy for anyone who cares at all about animation. The animation section of the popular streaming service HBO Max was suddenly and deliberately attacked by the corporate forces of the empire of Warner Brothers Discovery.

Sadly, this unprovoked and dastardly attack was not entirely unexpected. On August 2nd, the company announced that it would cancel two original film projects, Batgirl and Scoob! Holiday Haunt, despite both films being well into the post-production phase of development. Indeed, the canceling of the latter was so abrupt that the studio date for recording the orchestral score had already been scheduled, so they recorded it even after the cancellation was announced.

Things only went downhill from there. The day after the cancellations were announced, HBO Max quietly removed all the HBO Max Original Films they had already made, as if in an Orwellian attempt to convince people that they had never existed in the first place. Then came the aforementioned August 19th purge, in which several animated/children’s shows were removed from the site, including but not limited to: The Not-Too-Late Show with Elmo, OK K.O.! Let’s Be Heroes, Victor and Valentino, Summer Camp Island, Little Ellen, Mao Mao: Heroes of Pure Heart, Uncle Grandpa, Mighty Magiswords, Close Enough, and Infinity Train.

The termination of the latter two is especially infuriating for many animation fans, myself included, especially for how both shows had to fight an uphill battle even to get distributed in the first place. Close Enough, created by J.G. Quintel of The Regular Show fame, was initially set to air on an animation block on TBS that included American Dad! and Final Space. That was ruined when a show on the same block that was to be produced by Louis C.K. was canceled in the wake of his sexual misconduct allegations. Fortunately, it found a home on HBO Max a month after the service launched in May 2020, only to be evicted a little over two years later.

Infinity Train, meanwhile, started as a pilot that premiered on the Cartoon Network App on November 1st, 2016. It quickly became the most viewed pilot on the network’s official YouTube channel, and a petition to turn the pilot into a full series garnered 57,000 signatures. Cartoon Network announced a full series in March 2018 that premiered in the form of ten eleven-minute segments (similar to Over the Garden Wall) in August 2019. After four seasons (out of a planned eight) where audiences were enthralled by the adventures of the passengers on the mysterious and gigantic train as the bizarre and impossible environments contained therein forced them to confront their psychological demons, the series was abruptly canceled in April of 2021.

Social media campaigns to #RenewInfinityTrain (which I participated in) went unanswered. Finally, on August 19th of this year came the final insult, when not only did HBO Max remove the series, Cartoon Network deleted the original pilot from Youtube, as well as the soundtrack. Series creator Owen Dennis even gave fans of the show his blessing to pirate the series in retaliation. Fortunately, as of the day I’m writing this (August 21st), the series is still available for download on iTunes… for now at least (also Amazon Prime, but I don’t think I’m willing to further enrich that Lex Luthor cosplaying ghoul that runs the company, personally).

As you can probably imagine, I’m not exactly pleased with what has been happening at Warner Brothers Discovery lately. HBO Max was rapidly becoming my favorite of all the streaming services I use, thanks to its variety. From new blockbuster releases and Studio Ghibli’s library to Cartoon Network and the Criterion Collection, there was no shortage of content for me to discover.

But then David Zaslav took over as CEO of Warner Brothers Discovery and decided to pursue several cost-cutting measures, among which were the aforementioned removals and cancellations. Many have accused Zaslav of outright tax fraud, as it is nakedly evident that he’s using these shows as tax write-offs as well as trying to get out of paying residuals to the people who made them. He’s also stated that he wants to focus more on theatrical releases and is no longer doing Max Originals.

To be honest, though, it’s not anger that I’m feeling in this situation so much as despair. As someone who wants to work in the creative arts and who wants The Divine Conspiracy to become an animated series one day, this, more than anything else, has rammed home how much the arts are devalued under our capitalist system. This, paired with Disney’s lackadaisical approach to queer representation (or outright hostility in the case of The Owl House) and the recent news that Barnes and Noble will be effectively barring new authors from selling books until they can prove they will be successful, shows how incompatible the profit motive is with artistic creation. Artists are held hostage to the whims of fickle CEOs like David Zaslav and Bob Chapek, who can kill a movie or T.V. show just as quickly as they can greenlight it.

Indeed, my mind keeps coming back to a line from a recent USA Today article about the bombing of the Georgia Guidestones, in which Christopher Kubas, executive vice president of the Elbert Granite Association, had this to say:

It’s unfortunate. There are people that think just because they don’t like it, that no one should have the opportunity to see it or experience it, and so they’re going to destroy it for everyone else.

Christpoher Kubas, quoted in “Destruction of the Georgia Guidestones, a monument puzzling from the start, has only heightened the mystery,” by Amanda Perez Pintado for USA Today, August 19th, 2022

That echoes my feelings on the situation with HBO Max, especially with shows as wonderful and creative as Infinity Train, Close Enough, and Victor and Valentino being tossed aside in one of the most nakedly capricious acts I’ve seen committed by a CEO in a creative industry outside of mainstream video games. It’s left me even more uncertain of my future as major corporations continue to make decisions that condemn us all to a future where neoliberal fascism continues to ruin everything we love.

Sorry, this post was such a downer, but I just needed to vent my frustrations. Hopefully the next one won’t be so dour. Until next time!