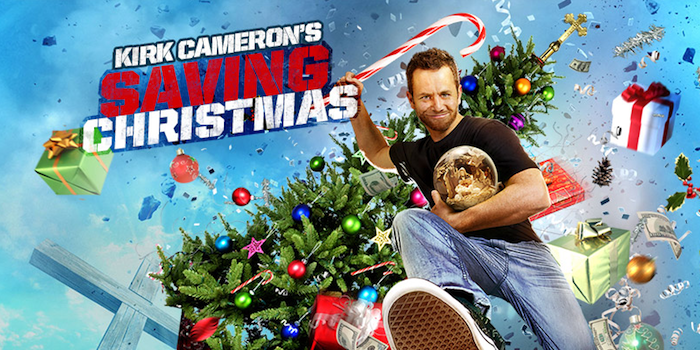 …and it was easily one of the worst mistakes I have ever made.

This movie came on the heels of the Christian movie renaissance in 2014 that also included films like God’s Not Dead, Heaven Is For Real, Noah, Son of God, Left Behind, and Persecuted. Cameron’s film differs from the others in that it’s presented in a pseudo-documentary style while simultaneously being a holiday-themed family comedy. And that may be part of the reason why this film is such a shoddy, disjointed mess.

Before I explain why, though, let me explain the plot of this film… as much as it can be said to have one. Kirk Cameron, playing himself, attends a party at his sister’s house and notices that his brother-in-law Christian White (played by the film’s director, Darren Doane) doesn’t seem to be feeling the Christmas spirit. When he retreats to his car, Kirk follows him. Christian opens up about his lack of comfort with how the holiday has become consumerist and over-commercialized, as well as how so-called pagan figures like Santa Claus have overtaken Christ himself.

Now, one would think this would be the part where the main character tries to help the doubting party overcome their grievances and show them that Christmas’s true meaning is still there, even if it is buried under all the capitalist excess and pagan influence, right? Well, apparently, that’s too cliché for Kirk because he’s convinced that all the holiday season’s materialistic aspects are actually ways of honoring Jesus. And by God, he’s going to make Christian see the error of his ways, even if he has to violate all the rules of logic (and even certain Biblical commandments) to do it.

First, he tries to compare the swaddling cloths that wrapped baby Jesus in his manger to modern-day gift wrapping. Then he argues that Christmas trees are actually symbols of the cross that Jesus died on because, as Alonso Duralde from The Wrap put it, “there are trees in the Garden of Eden, and Jesus was crucified on planks of wood, so tah-dah! Christmas trees!” Yes, seriously, that’s the kind of logical reasoning we’re dealing with here. During the same section of the film, he also dismisses the connection between Christmas and ancient pagan winter solstice celebrations because (and this is a direct quote): “Last I checked, it was God who created the winter solstice.”

But neither of these brain-dead rationalizations can quite compare to Captain Crocoduck’s reasoning for why Santa Claus deserves to be celebrated as a Christian role model.

You see, according to Captain Crocoduck, Saint Nicolas of Myra, one of the direct inspirations for Santa Claus, is a good role model for Christians because in his spare time not giving gifts to children and the poor, he went around beating up heretics, starting with Arius when he dared to challenge Christ’s divinity at the First Council of Nicaea. Also, rather than the white-bearded, red-suited jolly happy soul often associated with Nicolas and Santa, Captain Crocoduck’s version of the Turkish bishop looks like this.

Basically, all of this is Captain Crocoduck’s way of saying the second most offensive moral in this entire movie: beating the ever-loving shit out of anyone who disagrees with you is a perfectly reasonable response, and anything less is surrendering to every conservative Christian’s biggest bogeyman- political correctness!

So then, even though literally none of Captain Crocoduck’s explanations really got to the heart of Christian’s criticisms of the holiday, Christian is completely transformed. He joyously rejoins the party, and to make up for his crabby behavior, decides to throw a dance party set to a hip-hop rendition of “Angels We Have Heard on High.”

In all honesty, I was actually somewhat enjoying myself during Captain Crocoduck’s monologues since his logic was so batshit insane. But here’s the thing: Christian snaps out of his funk about 55 minutes into a film that’s 80 minutes long. How does the film fill its last 25 minutes? First, there’s the hip-hop dance party that lasts about five minutes but feels like it lasts twice as long as the movie itself. Then Captain Crocoduck spends the next five minutes or so narrating over beauty shots of his family’s ridiculously extravagant Christmas dinner, telling us how “Jesus came to Earth in a material body, so we celebrate Christmas with material things.” Even though both those things are based on two different definitions of the word material, but (sighs heavily), whatever!

Then, finally, we come to the ending credits… except that hidden in them are five more minutes of bloopers, including a three-minute section at the very end where two black partygoers improvise a terrible freestyle rap about how awesome Captain Crocoduck is.

That’s just a sampling of the awful pacing this movie has to offer. I haven’t even mentioned Captain Crocoduck’s opening monologue at the beginning that spends four or five minutes complaining about how atheists and liberal Christians don’t like the way his segment of Christianity celebrates Christmas (before the studio logos have even finished airing!). Neither have I mentioned the segment between Captain Crocoduck’s monologues where the aforementioned black partygoers discuss how the so-called “War on Christmas” is tied to Area 51, GMO’s, chemtrails, and other such conspiracy theory nonsense. Ironically, said discussion seems to be Captain Crocoduck’s way of criticizing Christians who believe in the War on Christmas, which is hypocritical considering the insanely implausible ways in which Captain Coroduck tries to justify his own insane beliefs about holiday iconography, like how he argues for nutcrackers being analogous to the soldiers who committed Herod’s Massacre of the Innocents (yes, really)!

But perhaps the biggest sin this movie commits is this little speech Captain Crocoduck gives toward the end during his Christmas dinner:

So this is Christmas. Pull out your best dishes, your finest linens, your nicest silverware, your biggest ham! Every side dish you can possibly imagine, and the richest butter. It’s time to feast!… And don’t buy into the complaint about materialism during Christmas. Sure, don’t max out your credit cards or use presents to buy friends. But remember, this is a celebration of the eternal God taking on a material body. So it’s right that our holiday is marked with material things.

Yeah, I’d like to see how a poor black family in this country’s inner cities might react to Captain Crocoduck’s prosperity gospel bullshit. Or better yet, how an even poorer black family working at a De Beers diamond mine in South Africa might respond to his explanation of how the gifts piled under the tree represent the skyline of Jerusalem (by that logic, they could also represent the skyline of Wall Street and thus be symbols of the totalitarianism of late-stage capitalism).

Basically, this is an anti-Christmas film. Materialism is good, charity is bad, and Santa is a bigoted jerk who beats up people who don’t completely agree with his religious beliefs. Seriously, even Sandor Clegane would make a better Santa than this fundamentalist maniac!

Long story short, there are so many better Christmas movies you could be watching rather than this one. Maybe Klaus on Netflix with its beautiful and revolutionary new style of hand-drawn animation. Maybe Rise of the Guardians with its colorful and badass reinterpretations of classic holiday figures. Or maybe even Christmas with the Kranks, I don’t know! Any of those are better than Captain Crocoduck’s schizophrenic ramblings. And I’m giving this one a Fuck you/10. Merry Christmas, you filthy animals! 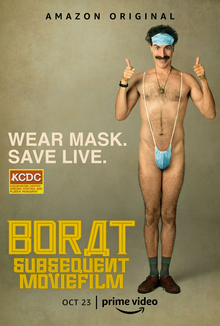 …and I give our favorite lovably antisemitic foreign reporter’s Delivery of Prodigious Bribe to American Regime for Make Benefit Once Glorious Nation of Kazakhstan a rating of “Great Sucess.”

And with that out of the way, let’s shift into proper grammar for the review.

A lot of people say this film is better than the original Borat in every way, and personally, I have to agree with them. Whereas the original was pretty much just one random event after another, this film actually has a narrative, driven by Borat and Tutar’s relationship. This isn’t to say that nothing in the original film was funny in any way, but actually having Borat go through a character arc was certainly fun to watch.

Speaking of Tutar, can we have a round of applause for Maria Bakalova’s performance? Baron Cohen really caught lightning in a bottle with this actress, and I really struggle to see anyone else who could match Borat’s comedic stylings while also giving the moviefilm an emotional core that its predecessor lacked.

Also helping the movie is Baron Cohen’s more sympathetic treatment of his interview subjects. Whereas the interviewees in the first film were often treated as mere prank subjects at best (i.e., feminists, gay rights activists, and the owners of the Jewish bed-and-breakfast) or outright monsters at worst (the racist rodeo attendees and the misogynist frat bros), here the interview subjects are presented in a much more sympathetic light. Not only are people like the Holocaust survivor Judith Dim Evans and Tutar’s babysitter Jeanise Jones treated with the genuine reverence that they deserve, but even people with otherwise morally repugnant beliefs, like the rednecks who help shelter Borat from the pandemic, are shown in a positive light for trying to teach him that women have and deserve rights, even as they preach to Borat about the QAnon conspiracy and advocate for violent revenge against the Democrats that they believe are perpetrating it. What Baron Cohen seems to be presenting here is presenting a much more optimistic portrait of America; yes, this country’s culture often makes it a melting pot of racists, homophobes, and other assorted bigots, but no one was born that way. There is still hope of reforming this society and curing it’s more prejudicial tendencies.

So all in all, just the kind of film US & A need right now. Funny, heartwarm, and politically conscious. Check out for hilarity and Rudy Giuliani sexytime. And I give Subsequent Moviefilm a 9/10.