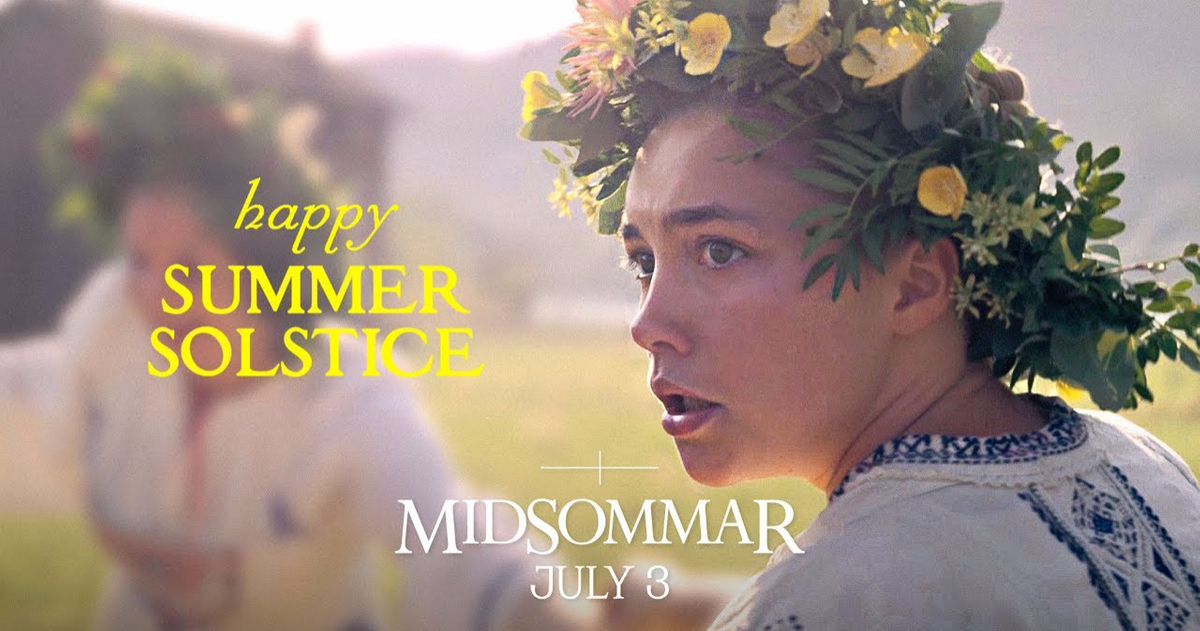 …and my feelings about it are rather… mixed, honestly.

Before I talk about my problems with the film, let me state for the record that this is by no means a bad film. The film was directed by Ari Aster, who also directed Hereditary, my current favorite horror film of all time. A lot of the elements that made that film so effective are also there in Midsommar. The cinematography is as brilliant as it was in Hereditary, greatly helping to complement the slow-burning tension. The acting was excellent, especially from Florence Pugh, who was definitely channeling Toni Collette during her more emotional scenes. The beginning scene also demonstrates how good Aster is at portraying family tragedies in the same vein as… that scene from Hereditary. Don’t play dumb, people, you know the one.

While I’ve never done drugs before, I’ve also heard that the scenes showing the perspective of characters under the influence of drugs were also very accurate. Indeed, it’s not for nothing that such figures as Nicholas Cage and Jordan Peele have heaped praise upon it.

Where my biggest problem lies, however, is in how some of the characters are portrayed, especially the cult itself. Unfortunately, in order to answer why will require major spoilers, so if you haven’t seen the film yet, I would suggest you see the film first before continuing with the review here. If you have seen it, or have no plans to, well then, let’s get started.

My biggest problem is how the protagonist Dani’s induction into the cult is presented in the film. Maybe it’s just because I’ve been watching too much of that Leah Remini series where she muckrakes Scientology lately, but to me, the Midsommar cult seems to be a vile institution. Their members force their elders to jump off a cliff to their deaths when they are seen as no longer useful, and they murder the foreign characters with impunity for questioning their rites. True, Christian and his gang are a bunch of frat-boy assholes, but does that really excuse the cult fucking blood-eagling that British guy for calling them out on said cliff jumping ritual?

The very ending, which seemingly shows Dani having finally achieved peace, thus rings kind of hollow given how she’s accepted this wretched hive as her new family. It certainly doesn’t help that Ari Aster himself was apparently inspired to make this film after he experienced a real-life breakup, even going as far as describing Dani as a reflection of himself. Don’t get me wrong, I’m not saying that Aster is trying to convince us that it’s good that Dani traded Christian for a giant clan of gas-lighters, but I definitely don’t blame some people if they did come to that conclusion. True, the cult members do put a lot more effort into comforting Dani during periods of emotional distress than Christian could be bothered to. Still, given that one of said emotional episodes was induced by the cult members forcing a drugged Christian into a sex ritual against his will… yeah, that doesn’t exactly endear them to me.

Still, even if the moral ambiguity of it all seems to work more toward the film’s detriment, in my opinion, it’s overall a great work of horror from a director who seems well on his way to becoming a true master in his field. It has a great atmosphere, a solid cast, and great special effects for the drug trip scenes. Definitely check this film out if you haven’t yet, and I’m giving this one an 8 out of 10.

Hey guys, this is a new thing I’m gonna be doing in between my other blog posts, trying my hand at movie reviews. This one was obviously a lot shorter than the Dark Tower one, as it is more in the style of YMS’ Quickie reviews.

I’m not sure how often I’ll be doing these. Just know they aren’t going to have a set release date as the other bigger posts will. I’ll just be doing these whenever I see a film that I feel like I have things to say about it. I hope you enjoy it! Thank you, buh-bye!

Not that it matters much with the lack of traffic here so far, but what the hell…

So, the world has kind of lost it’s shit since I last posted on here. Trump made probably the biggest mistake in his entire presidency…

He dismissed a coming epidemic as a hoax for months while it continued to encroach on our country. And so when it finally hit us in mid-March, we were forced to close our businesses and tank our economy so that the coronavirus didn’t infect more people than it already had. Hell, I even lost my job at the local hardware store because the proprieter wasn’t making enough income to pay me. So now here I sit like a bump on a pickle, as more rustic circles might say.

So why haven’t I been working on the blog more? Actually I have. Unfortunately, it has mostly been behind the scenes technical stuff. Yeah, remember when I said that most of the technical stuff had been taken care of in the last update? I was too optimistic. For one thing, it was a lot harder to get SSL certification than I anticipated. And even how that I have got it, the address bar for the blog proper still isn’t showing a padlock, so I have to figure that out.

Also, my site health tab keeps going back and forth on whether or not my site can be found on search engines. I’ve had it analyzed by Ryte.com, and it’s given me warnings about internal no-follow links, internal temporary redirects, duplicate content, and other things like that, so I have to figure out how to fix that stuff as well.

In the meantime, though, I still want to at least try to get some more writing done on the site. My main goal right now is put at least one entry in the other categories besides Art and Entertainment. I know that for Politics I want to start with a post further explaining my current political beliefs and how I came to them. I also may be doing posts outlining all the reasons I hate President Trump in another post, so you might look out for that. I don’t really have any solid plans for the Supernatural and Religion and Spirituality categories yet. I would like to talk more about my personal spiritual beliefs, although considering that those beliefs are playing a big part in shaping The Divine Conspiracy.

Of course, any discussion of my own fantasy epic will be going under the Personal Stuff category. You can definitely expect a post expanding on the basic premise of the story I’m writing, as well as maybe some elaboration on the characters and what they will go through. I also want to do a post talking about how being on the autism spectrum has affected me personally, and maybe also do a post debunking common myths and misconceptions about ASD.

I have definitely decided that building a second website with the two-domain purchase InMotion gave me is out of the question considering how much of a hassle creating this website has been. So I intend to make a DeviantArt account sometime in the near future to post my fiction work. I also need to expand my social media presence so I can promote this site more. I already have a Pinterest account, though I have yet to figure out how to promote the site there.

The only other social media site I’m willing risk joining is Twitter. Yes, I’m aware of the hate mobs and that Jack Dorsey does not seem concerned in the least that the alt-right is slowly hijacking certain parts of it. As far as I know, however, it doesn’t collect data on its user, at least not to the extent that Facebook does. And it doesn’t run political ads, meaning Russian bots can’t use it in the same way they use Facebook.

Before I do all that though, I need to figure out all the technical stuff so that my site is as healthy as it can be, even as the rest of the world sickens around me. I still plan to post weekly, and I still wish to try for a Saturday or Sunday deadline. I’m looking forward to what the future holds for this site.

Till next time, friends.